PACT is funded by the European Commission to promote awareness for communication and training targeting professionals and institutions that actively work in the support chain for women and children survivors of violence. PACT promotes collaboration among stakeholders, offers training and builds a European network of expertise in the field of violence against women and children.
In our December newsletter we announced the start of the national pilots including the Lisbon workshop.

The training kit has been piloted from March 2011 onwards. Each partner has organised the pilots individually. The overall duration of the course is approx. 70 hours of which about 50 hours are provided in e-learning, i.e. approx. 15 hours per month. The organisation of face-to-face workshops has been with the PACT project partners who adjusted the time table to the specific requirements of their participants. An integral part of the national pilots was the international workshop in Lisbon.

The highlight of the piloting phase was certainly the two-day workshop, which took place in Lisbon on June 16th and 17th, 2011.
We were a group of 40 people consisting of two to three participants of national pilots, the PACT partners and some guest speakers from the field. The focus of the workshop was on risk assessment for survivors and for professionals, exchange of good practice as well as on new approaches from the field.

The group met on the eve of the official workshop start and had a wonderful Portuguese dinner together in the heart of Lisbon. The variety of food and above all of deserts was tempting and promised a good start.

Speed dating – who is who

The workshop started with a first activating networking exercise to get to know to each other. This kind of speed dating required a good choreography and was quite challenging – people formed couples and stood in two rows in front of each other. Each couple had one minute, 30 seconds each partner, to present their professional background, particular interest and the colour they felt that very day to each other. After one minute (sharp!) the first in one row went to the end and the whole row moved forward to change couples. The noise of 20 couples talking simultaneously was tremendous but helped a lot to overcome language barriers.

After this noisy and funny start the floor was given to best practice examples. One example given by the Dutch colleague, police officer in Amersfoort, highlighted how the restraining order is handled in the Netherlands. Here a special role has been assigned to the mayor, who is responsible for the decision as to whether someone receives a temporary restraining order and must leave their home. It is also the mayor who can withdraw the temporary restraining order and the partner or family member may return home. In practice the mayor will usually let the police (Assistant Public Prosecutor) arrange it. Thus it is still the police (as it is the case in other European countries) who arranges the procedures, but it is the underlying principle that domestic violence is put on a political level which is the interesting aspect about it. The topic was also picked up in one of the workshops on risk assessment, where the specific requirements were discussed.

The second example of best practice was given by our German colleague from the Ministry of Justice, Lower Saxony, explained the Action Plan in Lower Saxony to promote cooperation and networking among various stakeholders in the field of domestic violence. It was made clear that successful cooperation can only function when all partners know about other professions in the field and are aware about opportunities and limits of cooperation of each profession. Education and further training play an important role to implement issues related to victims’ protection in all professions. Moreover, the Action Plan identifies special steps and procedures to deal with high-risk cases and implements a kind of case management.

A third example dealt with the successful recovery of a victim of domestic violence, who was invited to present her story to the audience. After long years of violence she succeeded in breaking the cycle of violence and in rebuilding her life. Thanks to a specific programme implemented by the Portuguese partner institution AMCV, she gained new self-esteem and is today in a position to talk about what happened to her.

In various workshops the topic of risk assessment was thoroughly discussed from different angles. A highly interesting approach from the Netherlands met big interest – a new concept in women’s shelters: the ‘Oranje Huis’ (Orange House). What is new about it is that the issue of domestic violence is no longer hidden in an undisclosed location. An ‘Oranje Huis’ is visible and recognisable and offers all services under one roof: advice, coordination, support and shelter. It provides direct help for all family members. Nevertheless, safety is their first priority, and thus the shelters are professionally protected and a risk assessment is carried out upon arrival of any client who seeks shelter. Orange refers to the target group, i.e. people who are in between green (no danger) and red (in life threatening danger).

Eager discussions in working groups (sometimes supported by a dictionary)

Feedback from the pilots 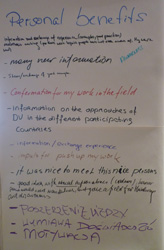 One aim of the workshop was also to gather feedback from the pilot phase. Workshop participants were invited to reflect together the experiences they made in their national pilots and to give their recommendations for improving the PACT training.
Comments and feedback concerning the following aspects were collected on wall papers and discussed: personal benefits, potential target groups, recommendations, (de-)motivating factors.
The PACT team is happy with the generally positive results and appreciates on the other hand the recommendations that are currently being processed.
All participants acknowledged the wealth of information that is delivered in the training course and appreciated above all the opportunity for e-learning. Since they all have limited time for training, they were glad to be able to work flexibly on the platform. The recommendations were mainly related to technical aspects of the e-learning platform. As far as the de-motivating factors are concerned, people felt sometimes lost in the numerous e-learning units and would appreciate a clearer structure. Motivating for all participants was above all the European dimension of the course and the chance to learn about different approaches in other European countries and to exchange with European colleagues.
If you want to learn more about the PACT training and get an account for our e-learning platform (available in EN, DE, IT, LT, PL, PT), please get in touch with the PACT project office: info@pact-eu.org.

The feedback on the Lisbon workshop itself was very positive: Participants generally expressed that they received new insights and information thanks to the participation in the PACT workshops. All of them appreciated the extent to which they gained new perspectives and fresh impetus for their work as well as new ideas for transfer like researching local resources or establishing a local network. The workshop clearly underpinned the need for collaboration in the field of domestic violence and confirmed that there is a general interest in exchanging knowledge and experience with colleagues from other countries and professions.

We did not only work… Impressions from the social events

After the successful event in Lisbon, we are now planning our final conference, which will take place on December 2nd, 2011, in Kaunas, Lithuania. The conference aims at bringing together stakeholders from different sectors such as adult education, domestic violence and policy making; furthermore representatives from women’s NGOs, police, social and healthcare organisations are invited as well as interested persons from all over Europe.
Beside project related discussions and presentations other relevant aspects will be addressed such as networking and collaboration, consequences of new legal regulation (Lithuania) related to domestic violence etc. The conference programme will be sent out in our next newsletter in autumn.
You can register already now for the conference at the PACT project office info@pact-eu.org.

We offer our courses in different languages, visit our Pact E-Learning website.