PACT is funded by the European Commission to promote awareness for communication and training targeting professionals and institutions that actively work in the support chain for women and children survivors of violence. PACT promotes collaboration among stakeholders, offers training and builds a European network of expertise in the field of violence against women and children.
As outlined in our May newsletter, the partnership conducted comprehensive research activities as well as interviews in order to explore specific needs and wishes in terms of training and networking of local stakeholders working in the field of domestic violence. The transnational synthesis of the results was compiled by the work package leader Orizzonte (Italy) and is available on our website. It has been the basis for the further development of our training kit and materials.

The partnership analysed all results of the needs analysis and clustered raised training topics in seven training modules. The seven modules contain both face-to-face and e-learning units:

As far as the training method is concerned interviewees clearly expressed their preference for e-learning as they could work flexibly in their free time. Generally, only few examples of attractive e-learning are available. Those that were found are mostly offered by American providers and do not respond to the identified needs nor do they reflect the European reality in various aspects, e.g. legal regulations.

The training kit is going to be piloted from March 2011 onwards. The overall duration of the course is approx. 70 hours of which about 50 hours are provided in e-learning, i.e. approx. 15 hours per month. The organisation of face-to-face workshops is with the PACT project partners who will adjust the time table to the specific requirements of their participants. An integral part of the national pilots will be the international workshop in Lisbon. 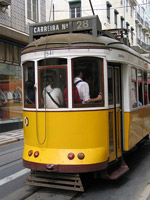 The highlight of the piloting phase is certainly the two-day closing workshop in Lisbon in June 2011 to which two to three participants of national pilots are going to be invited. The focus of the workshop will be on risk assessment for survivors and for professionals, exchange of good practice as well as on new approaches from the field such as different ways of handling the restraining order, “open” shelters or the like. Apart from gathering feedback on the pilot phase, lots of time will be dedicated to networking activities and exchange of expertise. We do believe that a European exchange will have a positive impact on the work of involved local stakeholders of every partner country.

Every European project has the task to realise dissemination activities right from the start of the project and so did PACT. Normally this is not necessarily worth mentioning. In this particular case we are proud to give two examples of what has been done so far in this field. 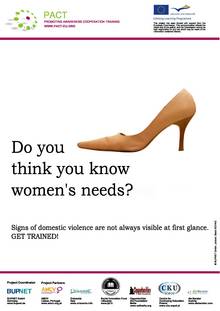 With the upcoming opportunity to present PACT in a big conference in Poland in September, the PACT partnership decided to create postcards and posters that are a bit out of the ordinary. We did not want to reproduce any act of violence to attract people’s attention but we were keen on creating something less obvious. Something that would not be directly linked to the topic of domestic violence at first glance but that would make people reflect. The BUPNET team had the idea to use simple objects of daily life – even objects stereotypically linked to women (like shoes) – and point to the problem that domestic violence is often not visible at first glance.
All in all seven postcards and posters were created, of which one is displayed here. There are all available for download on our website: www.pact-eu.org/index.php?id=downloads

Bilateral exchange in the Netherlands 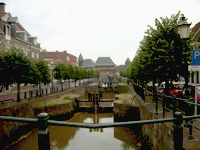 In answer to our May newsletter the PACT coordinating team was invited to visit representatives of the Dutch police in Amersfoort working in the field of Domestic violence. In September, two representatives of BUPNET went to see the colleagues in Amersfoort. Apart from talking about the PACT project and the potential involvement of the Amersfoort team in the project activities, the BUPNET team learnt interesting aspects about new approaches: Thus, for example, the mayor is responsible for the decision as to whether someone receives a temporary restraining order and must leave their home.

In a nutshell, it is still the police (as it is the case in other European countries) who arranges the procedures, but it is the underlying principle that domestic violence is put on a political level which is the interesting aspect about it.
(Further information on the restraining order in the Netherlands is available here: http://www.huisverbod.nl/doc/publicaties/folders_andere_talen_rijkshuisstijl/13870_Achterblijvers_EN1.pdf)

We offer our courses in different languages, visit our Pact E-Learning website.